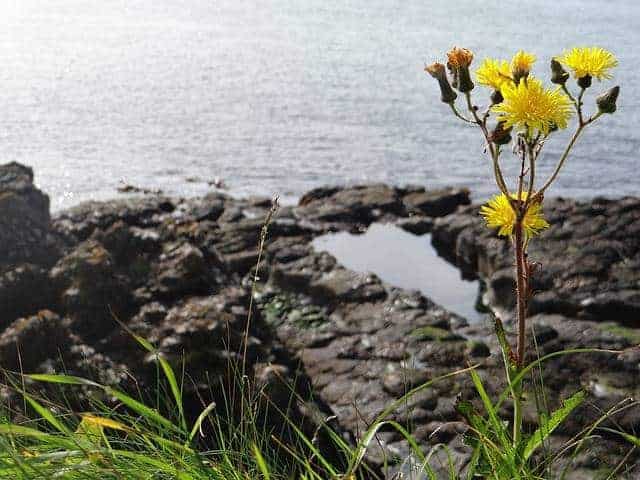 Planting seeds, blooming, and returning back to the soil is a common metaphor used to explain how the moon cycles impact us each month.

I offer this new metaphor for flowy, watery, ever-changing, adaptable humans like me. For those of us who do not feel grounded most days, and we definitely don’t feel like pretty flowers:

New Moon ~ An orange sunrise on a beautiful sandy beach — A new day. The water is calm where you sit but you can see the waves caused by the Spring Tide crashing, strong and powerful, on the reef in the distance. You feel the need to rise and spring forward.

Waxing Crescent ~ You find a paddleboard on the beach and decide to get in the sea and float. Dipping your paddle in the water, you gently move forward to explore the reef. You circle around it, watching the waves crash on the other side.

First Quarter ~ You feel the momentum and power from those waves and you need to experience them. You’re nervous, but also excited about not being in this calm little cove anymore. You receive support in the form of an amazing sturdy sailboat. You match the power of those waves with your own power, and you soar over the reef into the vast ocean.

Waxing Gibbous ~ It is a beautiful day at sea, sailing through the ocean under your own power. With only the wind and signs from the universe to tell you where to go next, everything just feels “right”. At night, you look up at the stars and ask them to guide you. You are enjoying your journey.

Full Moon ~ You find a new exciting beach and decide to anchor over and throw a huge party to celebrate your accomplishments and your journey so far. You invite friends, you imbibe, and you dance. You look up at the sky and appreciate the outward focus on your life. You dive in the cool water and swim naked around your boat, cleansing your body and feeling free.

Waning Gibbous ~ The sun is shinning in the late morning and you’re feeling a little hung over from your celebrations. You decide to take it easy and go for a swim to relax. It feels cold and refreshing and you spend some time snorkeling, thinking, and watching the sea life.

Third Quarter ~ It’s time to start thinking about heading over the next reef to go somewhere new. You’re feeling restless in this calm cove and the waves are beginning to become more powerful in the distance again. You take a walk around the island to say goodbye to your new friends and thank them for their time with you.

Waning Crescent ~ It is now sunset, dusk. It is time to let go of this current journey and get ready to begin the next. As it gets darker, you pause and take time to meditate on the beach, feeling a little sad, but ready to start fresh in the morning — A new day.

It has been over a year since I sent my “I have a secret” blog to my former best friend. She told me I was doing the devil’s work and I was going to hell. We haven’t spoken since.

I have changed so much since then. I am a medium. I am a healer. Those who have felt called to see me feel safe while crying their heart out in my studio (or over the phone). I offer them comfort, guidance, breakthrough, closure.

I have learned that what I do has nothing to do with me. I’m a channel, a middle-man, just there to help my clients come in contact with their higher selves, loved ones, and the universe. They heal themselves.

I have absolutely beautiful soul friends now. If I’m going to hell, it’s worth it, and I’m going with the most amazing people I know.

Don’t live your life in fear of what others think of you. Be you. Shine. Use your gifts. The world needs more love.

For my people in darkness

I took a class in college called “Playing the Other”.  It was a theatre class meant to experiment with playing a character that is the complete opposite of who you are.  Can a white person play a black person?  Can a straight woman play a gay man?  Can a Jew play a Nazi?

I remember during our first class our teacher asked, “Who are your people?”  My people?  My first thought was my family.  Surely my parents are my people?  My husband and my son perhaps?  Yeah!  My son is literally my person.  Really.  I made him myself!  But I didn’t think that was the answer she was searching for.  I had a very hard time trying to decide how to answer her question.  After much thought, I came to the conclusion that massage therapists are my people.  Since becoming a massage therapist myself, I had never met one that I didn’t hit it off with instantly, like I’d known them a million years.  I had no idea why I felt that way at the time, but I understand now.

I have experienced and learned so much since then.  I know who “my people” are now.  Healers are my people.  Who are healers?  Well, I’ll start with a little history lesson from my time in Salem, Massachusetts…

During the “Burning Times”, the dark ages of 19th century Europe, there were healers.  “Witches” who lived far from the city, in nature, making medicines out of herbs in their cauldrons.  And because they lived far from the city, it was too far to travel to church every Sunday.  And since there was no separation of church and state at the time, that meant trouble for these women. Only male physicians were allowed to prescribe medicine, and only the rich could afford to see a physician.  The poor would continue to see these wise women in the outskirts of town.  Something had to be done.  Rumors began.  Stories were told about how these witches’ potions would turn your skin green and give you warts.  They portrayed them with a pointed hat to discredit them as dunces.  They said they worked for the devil.  Fears about witchcraft escalated.  Hysteria.  It is estimated that 60,000 people were burned at the stake.  Most of them women.

Fast forward to the Salem Witch Trials of 1692.  A reverend’s daughter and niece had a mysterious illness that caused them to scream and flail on the ground with strange seizures.  The doctor during that time had very limited knowledge, so when he couldn’t come up with a cause, it was decided the girls must be bewitched.  Any mention of witchcraft in these puritan times caused panic because there was such fear of the devil.  Hysteria once again.   Women who were considered social outcasts, or those who were least able to defend themselves, were the first accused.   A slave from Barbados because she was dancing with the girls in the woods days prior.  A very impoverished single woman, and another who was known to not attend church and owned a tavern were next.  Escalated.  Fear.  Over 200 people were accused, 19 were hanged, at least 4 died in prison awaiting trial, and one man was pressed to death.

So what does this all have to do with me?  I’m a healer.  I’m a witch.  I stand with these women and I carry their spirits with me.  Like I learned in that college theatre class, I want to be authentically me.  I don’t want to play the other.  I want to live a life full of love and not fear.  My people are on the same journey as I am.  They are healers.  Artists, musicians, mediums, energy, light, and body workers… My people unselfishly heal others, and are almost always under some kind of scrutiny and judgement for it by those who fear.  Whether it be religious judgment, or judgment from our families who think we should “get a real job”, or just neighbors who think we’re weird.   We are still in the dark ages, but as the saying goes, “There is no light without darkness.”  So shine with me dear healers!  Step into your light without fear and shine!

I get asked that a lot lately.  Psychic?  Ugh.  I hate that word.  Hollywood has had the biggest hand in ruining it, but regular ol’ mean-spirited people ruin it too.  You see websites offering up “psychic services” all the time.  Here’s some examples from one I found the other day:

“I will improve your luck for any job”

“I will cast a spell to make you more attractive”

“I will place a powerful hex curse on your enemy”

“I will bring your love back to you”

“I will accurately predict your time of death”

(Side note: Don’t even get me started on what witchcraft is, or what it means to be a witch.  That’s a blog post for another day.)  But seriously, these are actual services being offered and I’m sure people fork over tons of money for them.  When I lived in Salem, MA there was a woman who was scamming people out of thousands of dollars saying she could remove curses.  Basically scaring sad lonely people into believing there was something wrong with them and that she, and only she, could fix it.  I know many positive, amazing psychics in Salem, and all over now.  Bad apples like that woman give us all a bad reputation.  And I’m not saying that she absolutely isn’t a gifted psychic.  She might be, but she’s channeling the lower energies that I stay away from.

It’s really not hard to predict the future. Say I pull a Tarot Card for you, or do a Reiki session, and I pick up on a “vibe” that you’re being a lazy jerk at work.  To say you’re going to be fired soon isn’t so much about being psychic, it’s using common sense and my 6th sense at the same time.  And you have complete free will to stop being a lazy jerk, or even quit before you’re fired.  So my prediction might be wrong after all.

When choosing an intuitive, healer, or medium, make sure you choose someone who is channeling the most positive energies for your highest good.  They’re doing it out of love, and not fear.  A healer should teach you how to best heal yourself.  An intuitive should help you to better understand your own intuition.  And a medium should only channel your loved ones who have the most positive amazing messages for you.  I strive to be that person.  My hope is that some day we can take back the word “Psychic” as a positive, wonderful thing.  Until then… intuitive it is!

“The world is not black and white.” I have heard this so many times the past few weeks about completely unrelated circumstances. I have heard it so much lately that I think the universe must be trying to hit me over the head with some important lesson. Perhaps it’s a lesson for more than just me…

The glass isn’t half full or half empty, it’s just a glass with some liquid in it. It is not in my nature to see the world in extremes. I’m usually neutral, in the middle, on any major issue. I can almost always see both sides of things. There are shades of gray, different perspectives. No right way or wrong way.

… Although after writing that paragraph, it sounds like I’m saying that thinking the world is black and white is the wrong way. Maybe that’s where the lesson comes in…

It doesn’t matter what line you walk as long as you walk with love and understanding, and not fear and hate.